Listen to the Bells of St Mary’s

The Bells of St. Mary’s rang out before the 9.30am service on Mothering Sunday, 30th March 2014, as they do every week. However, this was a very special day, as it marked the twentieth anniversary of the first ringing of the bells for a Sunday service at our church. 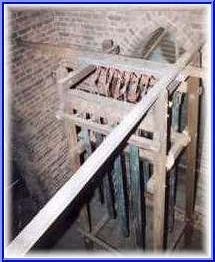 The town of Caterham is unusual as both churches, (only half a mile apart), have a peal of ‘full- circle’ church bells. However, unlike many churches that have had bells for centuries, both St. John’s Church in Caterham Valley and St. Mary’s on the Hill, have had bells installed relatively recently – in 1975 and 1993/4 respectively.

The installation at St. Mary’s was an exciting project which took about 18 months. It was hard work: many people acquired new skills and made new friends. The bells rang out for Mothering Sunday in 1994 amidst great excitement, so you can see why 2014 was very special.

St. Mary’s had never had a peal of ‘full- circle’ church bells, only a carillon of tubular bells.

In 1992, six bells became available from All Saints Church in Hamer, Greater Manchester. Sadly, this was due to an arson attack and the bells were sold to raise money for repairs to the church roof. Following a detailed structural survey, our tower was considered suitable for this ring of bells.

The bells were donated to St. Mary’s by the Surrey Association of Church Bell Ringers (St. Mary’s Tower is attached to the Southern Section) and two further bells were donated by parishioners to make a ‘ring of eight’. These last two were cast at the Whitechapel Bell Foundry.

Much fund raising had been going on during the whole time of the installation – from a sponsored swim to bungee jumping! We are also indebted to the many people who kindly donated money for specific requirements – for beautiful pine seats for the ringing room, for cushions, a table, heaters and much more.

St. Mary’s saved in excess of £50,000 due to the voluntary work so generously undertaken.

History of the Bells
St Mary’s History
Join with us to celebrate the joy of Christianity in a multi-generational and inclusive church right in the heart of Caterham...
Service Times
Copyright © 2016 St. Mary's Caterham. All rights reserved | Registered Charity No: 1134342 | Website designed and built by Pogo SG
Back To Top
×