Until 1995, St. Lawrence’s Church did not have an organ. But then Canterbury Cathedral offered a Chamber Organ for sale, and it was snapped up by the choir master of the time. The funds for the purchase of the organ were donated by Ray and Thelma Page, of Essendene Road, in memory of their son, Robert, who had died a short time previously.

The organ was manufactured in 1958 by N.P. Mander Ltd and is known as a Hoxne Model. It was named after the village of Hoxne which lies on the Suffolk/Norfolk border. Some eight or ten Hoxne organs were built altogether, and they are all differed from each other in various ways. 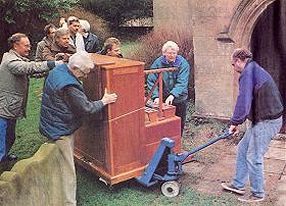 It was necessary for St. Mary’s congregation to collect the organ from the Cathedral, for which they had to dismantle the organ to make it fit into a transit van. This essentially consisted of removing much of the timber work above keyboard level and the organ pipes themselves.

Removing the multitude of pipes had to be undertaken with considerable care: not only are some of them very delicate, but it was obviously important that the correct position of every pipe be known so that they could be put back in the correct locations.

The whole process took us several hours, and provided a source of interest to the many tourists thronging the Cathedral. 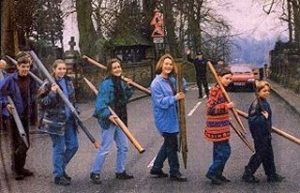 The bulk of the organ is fortunately mounted on casters as even in a stripped down condition it weighs somewhere in the region of a quarter of a ton. The organ had to be turned on its side to fit it into the van – with half- an- inch to spare. By the time the various panels, pipes and organ seat were loaded the transit was well and truly full.

Back at St. Mary’s the organ was off- loaded, initially into St. Mary’s, where it stayed for some time. To move directly into St. Lawrence was not possible due to the darkness, torrential rain and the sheer physical difficulty of moving the organ to the porch of St. Lawrence’s. There was also the unspoken concern about “is the door wide enough?”

Several weeks later rather early on a dry Saturday morning about 20 people turned up at St. Mary’s, to assist in moving the organ across the road to St. Lawrence. The local Press arrived as did the Police to control the traffic and with the aid of a fork lift truck the organ was transported without too much difficulty. The moving of the 150+ organ pipes also provided the younger element and the Photographer with a source of amusement and some interesting photographs!

The organ was manufactured in 1958 by N.P. Mander Ltd and is known as a Hoxne Model. It was named after the village of Hoxne which lies on the Suffolk/Norfolk border. Some eight or ten Hoxne organs were built altogether, and they are all differed from each other in various ways.

The re- construction of the organ with installation of the pipes (all individually vacuum cleaned) took a considerable time, but all was ready for trial at Evensong the following day. There was a large turn- out of congregation and Choir to the service which was thoroughly enjoyable, particularly with the accompaniment of the new organ.

The organ is kept in good working order by being regularly tuned (and serviced if necessary).

Whilst trawling the internet for information on East Anglian village brass bands, I chanced on your website to read the very interesting account of the transfer of a Hoxne organ from Canterbury to Caterham. I mentioned this to our new local history group (of which I am a member) who were extremely interested in the story. I also contacted N.P. Manders [the organ manufacturers] who very kindly explained why a small village in North Suffolk should have the honour of having organs named after it. I received the following reply from John Mander. 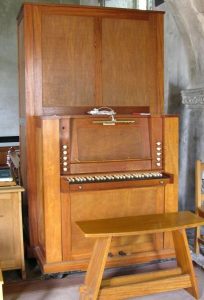 It seems that the reason that this organ is called the “Hoxne” is that my father had a particular affinity for Hoxne because his mother was brought up in Hoxne, in what is now (I believe) called Abbey Farm. My grandmother was also an organist and knew many of the important organists of her time. She was born “Pike” and traces her family back to an organ builder called George Pike England in the 18th century.

By coincidence our present Churchwarden now lives in Abbey Farm and knew of the Manders, who still visit the farm on occasions.

With so much interest in the organ would it be possible please to send a photograph of it (and any other information) for inclusion in the Hoxne Heritage Group archives. (Done – webmaster)

Thank you for your time in reading this and best wishes to all.

Join with us to celebrate the joy of Christianity in a multi-generational and inclusive church right in the heart of Caterham...
Service Times
Copyright © 2016 St. Mary's Caterham. All rights reserved | Registered Charity No: 1134342 | Website designed and built by Pogo SG
Back To Top
×