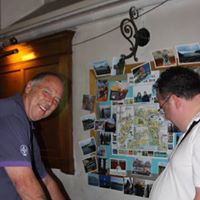 To raise money over the next three years we are creating a beautiful Lego replica of St Mary’s and Caterham’s oldest building, St Lawrence’s, the grade 1 listed church across the road. The scale model is designed by Rhys Knight (pictured with one he made earlier!) and will consist an estimated 50,000 bricks.

The scheme was the idea of Church Warden, Hilary Clark who had heard of similar projects elsewhere, including Durham Cathedral. Her hope is that it will grab the imaginations, not only of Caterham residents and model enthusiasts, but also anyone further afield who appreciates and wants to preserve the beauty of church architecture. 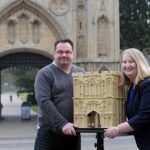 The build, which started with the main door of St Mary’s in August 2018, is expected to take at least three years to complete.

The bricks will be sold for £1 a brick in church and at events where the model will be on show, but can also be paid for by individual or corporate donations, some of which we will be able to claim Gift Aid on.

The hope is that the project will raise at least £30,000 to pay for essential repairs and maintenance. Three quarters of the funds will go to St Mary’s and the remaining quarter to St Lawrence’s.

You can follow the model’s progress and see where it will be on show via The Caterham Lego Church Build Facebook page at https://www.facebook.com/legochurchbuild

Make a donation
Email Us to Donate
Latest Lego News

One of our congregation was on BBC Surrey Radio, this morning, talking about the Lego Church Build on the Sunday Breakfast show with Emily Jeffery. Recorded after the service last…

Help! We need to rebuild the church! No, don't worry, this isn't part of a new planning nightmare for Caterham (our dear little St Lawrence's is Grade 1 listed so no…

read more
Join with us to celebrate the joy of Christianity in a multi-generational and inclusive church right in the heart of Caterham...
Service Times
Copyright © 2016 St. Mary's Caterham. All rights reserved | Registered Charity No: 1134342 | Website designed and built by Pogo SG
Back To Top
×